Pope says, "To err is human, to forgive divine." In the record of the Master's ministry he often said to those who had gone to him for help, "Thy sins be forgiven thee;" and this divine forgiveness was a blotting out of sin, the only real forgiveness. Human forgiveness is often merely a forgetting, whereas the understanding of divine reality, which sees man perfect as God made him, effaces all trace of sin and shows compassion in Jesus' way. The statement that Jesus was "moved with compassion," defines his attitude toward those who were seeking for that uplifting of Christ, Truth; and "he healed them all" is the simple comment made.

In this age, also, we have an example of this God-given compassion, through the healing ministry of our dear Leader, who has described herself as "a willing disciple" (Science and Health, Pref., p. ix). We, too, must have this same compassion if we are to lift up the Christ-idea, to help those who seek release from bondage to evil. Should there come to us one who is borne down by the weight of sin placed on him by belief in evil, the burden of a misspent life, surely we can feel neither human sympathy nor antipathy toward this victim of fear, but only divine compassion, and such compassion will enable us to cast from him some portion at least of his weight of false sense. We can then listen patiently to the recital of misdeeds, however bad they may be, without any feeling of being shocked or horrified, by knowing that in the divine consciousness there is no evil, no shadow, and no terrible past, but that good and harmony are always present. Mrs. Eddy says, "Tenderness accompanies all the might imparted by Spirit" (Science and Health, p. 514). 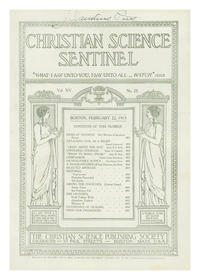