When , in 1908, I read in the Sentinel that Christian Scientists were to have a daily newspaper, I immediately subscribed for a copy to be sent to a member of my family, but being myself in Honolulu, about six thousand miles from Boston, I thought I did not care to take it. Shortly after this, the announcement was made that our Leader requested that "every Christian Scientist ... subscribe for and read our daily newspaper" (Sentinel, Nov. 21, 1908). Although abundant proof of her wisdom in leadership was not lacking, and I knew she had good and sufficient reason for making such a request (whether at the time I saw what it was or not), I confess I stopped to argue with myself, instead of sending in my subscription at once. 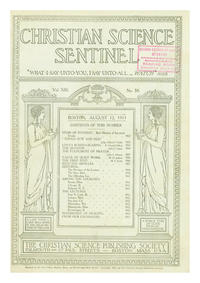