Our critic remarks in a sort of parenthesis that a magazine...

Our critic remarks in a sort of parenthesis that a magazine has been brought to her notice which discusses healing without the introduction of the "irritating name of Mrs. Eddy." It no doubt does discuss healing, but it certainly cannot discuss Christian Science healing and leave Mrs. Eddy out. You might as reasonably talk of the irritation you suffered on hearing the name of Darwin connected with evolution, or that of Stephenson with the steam-engine. I can quite understand that Mrs. Eddy's name may be irritating to some people, because I know that there were those who regarded Paul as a "pestilent fellow." Our critic says that there is nothing to prove that Jesus himself did not "sanctify and strengthen one of the natural means of cure." Has our critic the faintest notion of what the medical science of the first century was like? Does she know that it consisted, according to Pliny, to a large extent of prescriptions which, even in that extremely plain-speaking Roman world, he described as too filthy to mention? Does she know that it consisted partially of healing by exorcism, and of the worship of Asklepios? Does she realize that the cure for a viper sting, to give a single instance, was tablets made from a viper, boiled in a shallow pan, in water seasoned with dill? Or does she mean that, although Jesus declared that it was impossible to heal by a belief in good and evil, that he sanctified this force of mental suggestion, and in some inexplicable way made evil good?

Finally, our critic is good enough to say that Christian Scientists deny all evil, and therefore the necessity of the command to take up the cross. Now it is perfectly true that Christian Scientists deny that evil is real—that is to say, that it is God-made—but they do not deny that the belief in evil has to be eradicated from the human consciousness by destroying in it the belief of evil as power. It is very much easier, with all due respect to our critic, to say that those who are opposed to you are not taking up their cross, than it is to take up your own, and it is a statement very much more honored in the breach than the observance. The only way in which the Christian Scientist can ever hope to heal the sick is by the effort so to destroy all belief in evil in himself as to begin to have in some measure the Mind that was in Christ Jesus. Our critic may talk lightly of Christian Scientists not taking up the cross, but Christian Scientists are going daily about the world, striving to heal the sick, with the knowledge that whenever they fail they may be dragged into the coroner's court and hounded there. When our critic herself faces a life like this she will have discovered one of the innumerable ways in which Christian Scientists are taking up their cross. Until she does it she would be more generous, and nearer the Christianity she denies to them, to remain silent on the subject, and to remember the saying of Christ Jesus, that Christianity consists not merely in preaching the gospel but in healing the sick; also, that Jesus never used material means.

Send a comment to the editors
NEXT IN THIS ISSUE
Selected Articles
There are those who say that Christian Science does not... 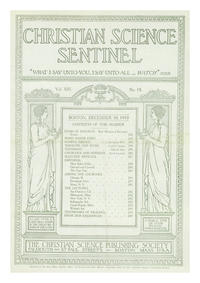