It has been said that the assertion that there are people living to-day who can heal the sick in the same manner as Jesus and the apostles healed, savors strongly of presumption, and there is a tendency to regard with some measure of suspicion those who make this claim either for themselves or others. It is argued that men and women of to-day are not as spiritually minded as were the apostles, hence they are not good enough to heal the sick even if it were God's will that they should do so. To profess to be able to do this work is to assume too much, and claims a degree of superiority which all are not willing to admit.

A brief consideration of this question may dispel the mists somewhat, and we hope it will enable the honest investigator to see more clearly the position of those Christian people who believe that the Christ-method of healing is taught in Christian Science and is to-day practised successfully by thousands throughout the world. Be it understood, however, that the advocates of Christian healing claim no more for themselves than they affirm to be the privilege and divine right of all mankind. The law of spiritual healing is ever-operative, and the one who understands this law can apply it and the results are sure. If it were claimed to be the privilege of the few to know God as the healer of sickness, the charge of presumption might not be without foundation, but since it is claimed that all may know the truth which heals physically and morally, this charge is left without any basis. 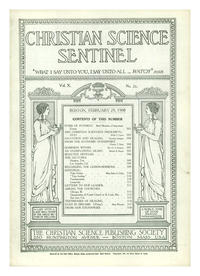