"You are simply trying to outwit the will of God with...

"You are simply trying to outwit the will of God with calomel and olive oil, if God sent sickness and death as a means of chastisement," said Rev. Byron Holley, rector of St. Paul's Church [Chattanooga, Tenn.], this morning [Oct. 20], in a most remarkable sermon. This is the leading Episcopal church in the city, besides being the wealthiest congregation. The rector disputed the generally accepted doctrines of all Protestant churches, including his own, and said it was common belief that sickness and death were sent by God, this doctrine being included in the prayer-book service and sung in the hymnals. ... "I cannot believe," he said, "that God would send sickness and disease to waste away a beautiful child or trusting wife and mother; I cannot believe it after a lifetime of study, notwithstanding that I have preached it upon several occasions in carrying out vows taken when ordained."

Send a comment to the editors
NEXT IN THIS ISSUE
Article
In an address to the student-body of the University of Pennsylvania... 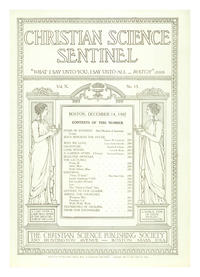