Congress in its recent session took the position that as a navigable river and boundary Niagara comes under the control of the Nation, and thus even the privileges already granted by New York are of no effect. While those now obtaining power from the stream are not forced to give up their business, they get notice that they are not entitled to what they already have, and that any further favors will be granted subject to recall at any time. Permission to use the water may be granted, but to a limited extent. All privileges granted by the bill passed by Congress are to hold but three years.

The plans for the new Boston Museum of Fine Arts have been approved. The institution, which is to occupy an imposing site in the Back Bay section, will be ready for occupancy in about three years. The main building of the group, planned to cover an area of about 320 by 200 feet, will be for the greater part not over two stories high, and will be the first edifice to be constructed. The other buildings will be grouped harmoniously about the main structure, following the plan of the best museums in Europe and America. 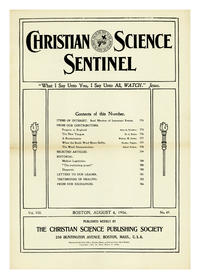