A Christian Scientist in praying for the sick prays not...

A Christian Scientist in praying for the sick prays not in order that God may change, for God is unchanging, but that the patient's thought may be lifted to know the reality of divine Love which is the real substance of the universe. The vital force, the dynamic force, referred to by "Anon," has nothing to do with it. In fact, to conceive of one as having inherent force of himself would defeat his healing in Christian Science, because that would deny the omnipotence of God. Jesus, who knew more of the true nature of the universe than any man that ever lived, declared that he could of himself do nothing, and that all things were delivered unto him of his Father.

Christian Scientists follow the Christ-method. They know that mortals' thoughts are a rope of sand and their power of control a deception. Before the vision of a universe of Spirit the petty thoughts of men shrink away, and when one looks to God for his healing, his strength, and inspiration, he sees the weakness and folly of hypnotism and kindred systems and discards them.

Send a comment to the editors
NEXT IN THIS ISSUE
Article
It is the custom to sneer at Christian Science, but it is... 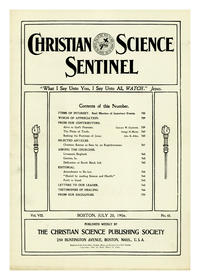