What is Christian Science?

As we see the benefits resulting from Christian Science treatment in our own cases or the cases of others of which we have positive and undoubted knowledge, as we read in our periodicals of innumerable cases healed through Christian Science after so-called medical science had failed, we are no longer surprised at its rapid spread, or that the question, "What is Christian Science?" should be so frequently asked. Sometimes the questioner answers himself, and from his own prejudiced standpoint, without investigation or mental reservation. The answer which the questioner thus conjures up in his own mind does not surprise those of us who formerly were bitterly antagonistic to what we supposed Christian Science to be, and we now know that, with no understanding of the subject, we were ready to declare what Christian Science stood for, without realizing that to answer the question intelligently and justly, a correct knowledge of the subject is required, from all of which it is apparent that Diderot was right when he said, "Ignorance is less distant from Truth than prejudice."

During the great trial that left its imprint upon the civilization of the world, Pilate asked the Master, "What is truth?" and that question, which has been so fraught with significance to the human race, has come down through all the ages. No doubt the rabbis of that day answered the question from their own limited sense of things. He who had come to announce the allness of Truth, to fulfil and not to destroy the law and the prophets, was publicly crucified through prejudice in its worst form. So those who represent Truth have had to suffer in all ages through ignorance, bigotry, and superstition. Truth itself could never suffer, for the eternal verities of being are undisturbed. Crushed to earth, truth rises and overcomes error in its every form and phase. 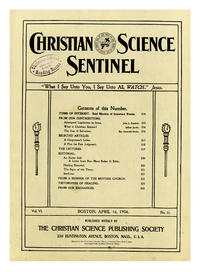