Mrs. Eddy teaches that God, infinite Spirit, is omnipresent and, therefore, the only entity, and that the physical universe is, therefore, phenomenal and not a reality in the true meaning of that word, or in the sense in which God is reality. It follows as a necessary logical corollary that the evidences of our physical senses, such as tasting, are not matters of imagination on our part, but are phenomena merely, as contradistinguished from the realities of being. This teaching is being more and more corroborated by the later conclusions of the physical scientists, who are abandoning the former dogma in natural science that matter is real, and resolving matter, in its ultimate analysis, into non-reality or phenomena. If matter were entity, instead of phenomena, atheism would be the only logical outcome. But physical science is now proving, like the metaphysics of Christian Science, that matter is not an entity because it is not self-created or self-energized. Physical science, in other words, is demonstrating that the dynamics of the material universe—that is, the primal energy that creates and moves all its phenomena—is extra material. Therefore, as Mrs. Eddy teaches, the dynamics of the universe is Mind, or God. When dogmatists attempt to ridicule the Christian Science doctrine as to matter, they are unwittingly assisting the falsehood of atheism with a premise, which, if true, would be a terrible argument against the existence of God as omnipresent, omnipotent, all-loving Spirit.

No one who keeps pace with the latest teachings in what are called the natural sciences, can be unaware of the beneficent fact that they are fast becoming the ally of true Christianity by helping to prove that extra-material Spirit is the creative and energizing reality of the universe. Former dogmas of some natural scientists that matter is self-evolved and self-sustained, attempting to substitute evolution in place of God's creation, were never more than wholly unsupported conjectures, and they are now substantially abandoned.

Send a comment to the editors
NEXT IN THIS ISSUE
Article
Whatever there may be in the contention as to whether... 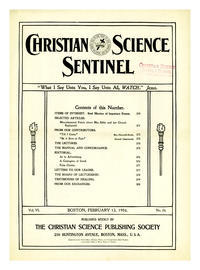