Mrs. Eddy with contributions from Editor

This article was later republished in&nbsp;The First Church of Christ, Scientist, and Miscellany:&nbsp;My. 304:1-305:25

The publication in The Literary Digest of May 30 of an article attributing the origin of Christian Science to Ralph Waldo Emerson, has led Mrs. Eddy to make the following statement, which appeared in The Boston Journal of June 8. Mrs. Eddy's correction is not a reflection upon the Unitarian denomination.—[EDITOR.]

I was early the pupil of Miss Sarah J. Bodwell, the principal of Sanbornton Academy of New Hampshire, and finished my course of studies under Prof. Dyer H. Sanborn, author of Sanborn's Grammar. Among my early studies were Comstock's Natural Philosophy, Chemistry, Blair's Rhetoric, Whateley's Logic, Watt's "On the Mind and Moral Science." 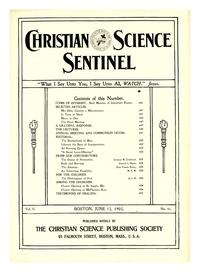