"First the Blade, then the Ear."

CHRISTIANITY, or the new birth, must be a matter of spiritual development and growth. The Christian era began with the birth of the Bethlehem babe at the very moment that the guiding star of the east poised over the lowly manger in Bethlehem, but the first notable sign of divine power appeared through Jesus when he had reached the age of twelve, when he confounded the wise men by his phenomenal understanding of the Scriptures, and not again until he had reached the age of thirty, when he started out on his grand and most holy mission of healing the broken-hearted, of preaching deliverance to the captives and recovering of sight to the blind, and to set at liberty them that are bruised, thus setting the example for his students whom he called early in his public career; and we find that his own works increased in magnitude during the following three years, until he reached the mighty demonstration in conquering the world, the flesh, and the devil, and finally destroying the last enemy—death.

In the language of Mrs. Eddy, "Nothing aside from the spiritualization—yea, the highest Christianization—of thought and desire, can give the true perception of God and Divine Science, that results in health, happiness, and holiness. The new birth is not the work of a moment. It begins with moments, and goes on with years; moments of surrender to God, of childlike trust and joyful adoption of good: moments of self-abnegation, self-consecration, heaven-born hope, and spiritual love" (Miscellaneous Writings, p. 15). 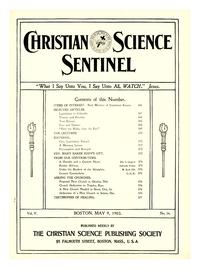