A Clergyman's Impressions of Christian Science

AFTER reading many criticisms on Christian Science, and hearing many adverse comments upon it, and after adding my own objections to these, publicly and privately, I began to investigate by carefully reading the various publications issued by that denomination. Some of these did not make a serious impression upon me, but two books books certainly did; namely, "Unity of Good" and "Science and Health with Key to the Scriptures." These impressed me as containing more spiritual power and insight into the nature of God and the character of evil than any books I had previously read. I was not a little troubled, and now and then startled, at certain radical statements on fundamental questions, such as the perfection of man, the nothingness of evil, and the negative character of matter. But these mental surprises, which the new reader receives from time to time, and which furnish in many cases the main reasons why people criticise and even reject Science as a whole, especially if they approach it without first being healed of some disease, did not overshadow for me the spiritual element that shone above and through them all.

I was enlightened, not philosophically, but spiritually enlightened. I do not believe any person can peruse these writings without receiving great good from them, unless he reads with a prejudiced mind which converts all gold into dross, or permits startling statements to close his ear to the Spirit's voice. No reader can do justice to these books, or to Science as a system, without approaching them in a child-like spirit, nor is the judgment of any one upon them worth anything without the calm, unbiased attitude of mind which must characterize the competent judge in all departments of knowledge. Knowing this to be a prerequisite of mind and heart, I laid aside every preconceived idea which I had received from years of theological study, and scrutinized carefully every doctrine and Biblical interpretation, that I might know the truth and the spiritual import of Christian Science. And while I am a clergyman of another denomination, in active work, I feel that it is my duty to bear witness to the truth, lest the woe pronounced upon a certain class of persons, should be passed upon me for calling good evil and evil good,—which I had done many times in sermons and remarks about Christian Science. I commend this course to my brother clergymen and to others who, I am afraid, do in many cases as I did, pass judgment upon a system of truth before they understand it to any great extent. 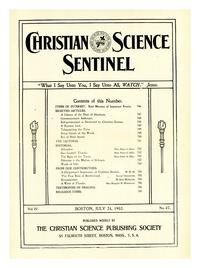