The final results of the twelfth census give the total population of the United States on June 1, 1900, as 84,233,069. The Chinese, British, and Russian empires are the only countries which have a greater number of inhabitants under their flags. They also have a greater area. The total area of the United States, including all insular and other possessions, is now 3,690,822 square miles, about one-fourteenth of the entire land surface of the earth.

A definite protocol between the United States and Colombia, embodying the terms under which the latter government will grant the rights necessary for the construction of a Panama canal has been delivered to Secretary Hay by the Colomblan minister. Compensation for the canal rights is desired to be in the shape of an annual rental of $750,000. 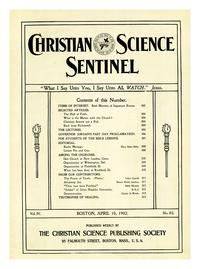