The (Baptist) Watchman says: "Harnack, in an article in the first number of the new Zft. f. N. T Wiss., March, 1900, discusses the authorship of the Epistle to the Hebrews, and concludes from verse 23 that there was 'a plurality of authors,' who were none other than Priscilla and Aquila, the friends of Paul. The Epistle, according to a summary of Harnack's article in the Interior, was addressed to a 'house church' in Rome, not the whole church; hence no church is named at the outset; it was written after the death of Peter and Paul, by persons well known as teachers in Rome, and longing to return to Rome; but the coldness of the church friends there made it more advisable to address them by letter. The names of the writers were not attached to the Epistle because Priscilla was a woman."

President Faunce of Brown University, in his baccalaureate sermon, delivered June 17, said: "The pure in heart shall see God and all that God has created; the impure in heart shall remain blind all their days. If there is in any man's soul a yielding to still lower temptation, to the seductions of appetite or passion, this still more fatally clouds the brain and makes truth impossible. The sensual man has not simply broken laws human and divine, he has deliberately gone into the cellar to live, and the vision of the sun and stars and the mountains of God is forever hidden from his eyes." 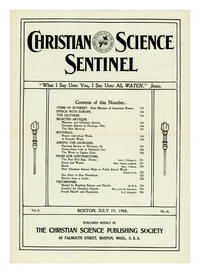