To the Editor of the Advertiser:—The story of the disappearance of Charles Rawstrum of Montclair, has been copied in the exchanges, probably from ocean to ocean, and from the great lakes to the Gulf. An acquaintance has just informed your correspondent he saw it in an Alabama paper.

Now that Mr. Rawstrum has been found and the papers are again alive with the same old story as originally told, I beg for a little space in which to point out its glaring inaccuracies and those of a similar article published in your city at about the same time. The Rawstrum story was, briefly, that an industrious carpenter, twenty-four years of age, had been for two years a regular weekly attendant of the Second Church of Christ, Scientist, at Madison Avenue and Twenty-ninth Street, New York, and had finally been made insane through the study of Christian Science, and had disappeared to work for the cause, leaving a wife and child penniless. 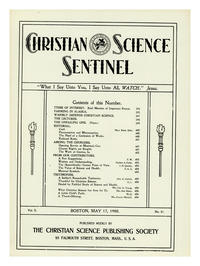