Among my first recollections as a child were of seeing my brother in bed, a great sufferer from headaches. His sufferings made such an impression upon my child-mind that it was not long before I developed the same malady, only in a more aggravated form, which kept me from two to three days at a time confined to my bed, interfering greatly with my studies.

These continued for several years, when other complications arose, and for ten years I suffered with nervous dyspepsia, female troubles, and in fact, I fancied I had every disease known to materia medica. Besides taking the medicine prescribed by my physicians, I exhausted every well-known patent medicine that was recommended for my particular case, with no benefit. The more I took the worse I became. My professional duties took me to Europe, where I continued my search for health, which was doubly necessary for me, as my voice meant my living. 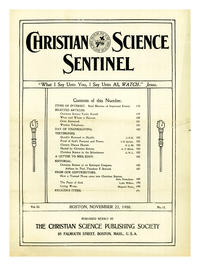