Praying in the face of gender bias

We can prove, in some measure, that we have an unlimited, divine nature.

A university student asked to interview me for a class assignment about women in the ministry. While the Church of Christ, Scientist, does not have ministers as such, I practice Christian Science healing, which is a religious and spiritual ministry. I was impressed with the quality and depth of the student’s questions, but several minutes into the interview I said, “Your questions start with the underlying assumption that I approach my life first from the standpoint of being female. I don’t.” Surprised, he asked me to explain.

My answer indicated that I might start from that standpoint when doing things such as selecting clothes, but that overall, I approach my life from a God-based foundation. Given that God is All-in-all—that is, Father-Mother, Truth and Love—the child of God is not defined by physical characteristics such as gender. Our identity is spiritual because we reflect God, Spirit, and therefore include spiritual attributes. So, in making decisions, I ask myself what is right rather than what I should do as a woman.

Christ Jesus didn’t divide his teachings by gender. He ignored the social norms of his time, speaking to women publicly. He healed women, men, and children, and both women and men accompanied Jesus during his ministry. He said to one and all, “Seek ye first the kingdom of God, and his righteousness” (Matthew 6:33).

Speaking of God’s universal nature, Jesus’ disciple Peter said, “Of a truth I perceive that God is no respecter of persons: but in every nation he that feareth him, and worketh righteousness, is accepted with him” (Acts 10:34, 35). To me this indicates that God is impartial, and that those who follow and obey God and live rightly know God’s love and care.

While I strive to be kind, gentle, compassionate, and forgiving, which traditionally might be considered feminine qualities, I also strive to be strong, honest, and courageous, which traditionally might be considered masculine qualities. Through this line of spiritually based thinking, we can better ourselves physically, morally, and spiritually, and therefore improve humanity. When one God is understood to be the Principle of all existence, the way is clear.

That’s what Mary Baker Eddy, the Discoverer of God’s laws, or the Science that underlay Jesus’ words and works, understood. She wrote: “Let us accept Science, relinquish all theories based on sense-testimony, give up imperfect models and illusive ideals; and so let us have one God, one Mind, and that one perfect, producing His own models of excellence.

“Let the ‘male and female’ of God’s creating appear” (Science and Health with Key to the Scriptures, p. 249).

Created by God, each of us is, in reality, an individual, spiritual expression of God, good. Just as each ray of the sun expresses the light, energy, and warmth of its source, so each of us expresses the qualities of our divine source, God. As we correctly identify ourselves and others spiritually, refusing to believe that even one of God’s ideas can be limited in any way, we can prove, in some measure, that we have an unlimited, divine nature.

This truth proved practical throughout my work in business. As an example, I once had an employer assign me to be the liaison with a key customer. The customer, an executive, initially assumed I was an assistant. When he learned that I was the team’s leader, he openly mocked and ridiculed me based on my gender. I refused to take offense, remained calm, and shared intelligent, well-researched and -reasoned solutions to his stated business problems, while silently acknowledging God as all-power.

Understanding everyone’s spiritual identity helped me not accept mortal limitations as true about me or about him.

Several times over the course of three more meetings, the executive made statements meant to intimidate and embarrass me or drive me away from the account. I stood up to these offenses by speaking to him, but letting my words be guided by God. Because God is divine Love, I could be certain of the spiritual power of my prayer and trust God to direct my actions. Understanding everyone’s spiritual identity helped me not accept material limitations as true about me or about him.

The business relationship blossomed to benefit all parties involved. The executive’s assistant observed his dramatic behavior change toward not only me but also my team and other business associates. She attributed the improvement to my actions, which I explained were directed by my prayers. When I left the account a couple of years later, the executive apologized for his initial indifference and cruelty and stated that he was grateful for gaining so much more than just good business results.

Science and Health explains, “When the divine precepts are understood, they unfold the foundation of fellowship, in which one mind is not at war with another, but all have one Spirit, God, one intelligent source, in accordance with the Scriptural command: ‘Let this Mind be in you, which was also in Christ Jesus’ ” (p. 276).

The university student who had interviewed me later said that he was pleased to have gained a higher, more spiritual perspective, and that his professor did as well. And, yes, he earned an A on his paper.

Send a comment to the editors
NEXT IN THIS ISSUE
TeenConnect: Q&A
No more panic attacks 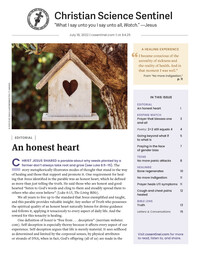