A brief prayer changed my life

I was introduced to Christian Science over forty years ago when I received a surprising answer to a very short prayer. I had grown up in a different Christian denomination, and during my school years had explored several other Christian faiths. I loved and frequently read the Bible. But what I read was sometimes confusing, and it seemed to me that many of the promises made in the Bible were just not realistic in today’s world.

One night after I had moved to a new state and was feeling a bit adrift, I asked God to show me a more satisfying approach to Bible study. The next day, a temporary worker was hired in the office where I worked. She was wearing a little pin, a cross with a crown on it. I asked her about it, and she replied that this was a small symbol of the religion she practiced, Christian Science. She had with her copies of The Christian Science Journal and the Sentinel, which she happily gave me. Over the time that she worked in our office we became friends. 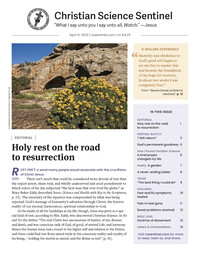