While doing an errand with my two teenage children several years ago, I turned off the highway onto a side street and waited for a car opposite to me to turn so I could turn left. Since there were no other cars, and the car was almost out of my way, I began to move into the intersection—but the car unexpectedly stopped in front of me. As I started to go around it, we were broadsided by another car traveling at high speed.

The next thing I knew, my son was waking me up, asking if I was OK. I told him yes and asked if we had been hit. (Thankfully, both of my children were just fine.) I woke up again when paramedics were trying to get me out of the car, then again when I was in the ambulance, and after that in a hospital emergency room. 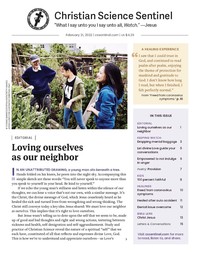