Reversing what the senses tell us

We have the authority to reverse whatever is not consistent with God’s goodness.

I have always been fascinated by the fact that the sciences often reverse what the physical senses say. For instance, astronomy contradicts what we perceive as the rising of the sun, explaining that the sun is actually still and the earth is turning.

Science and Health with Key to the Scriptures by Mary Baker Eddy says of such impressions: “The earth’s diurnal rotation is invisible to the physical eye, and the sun seems to move from east to west, instead of the earth from west to east. Until rebuked by clearer views of the everlasting facts, this false testimony of the eye deluded the judgment and induced false conclusions” (p. 121). 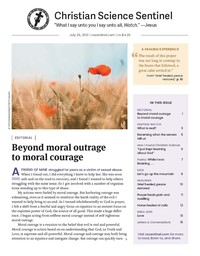