For a long time, I had a deep desire to give a testimony in a Christian Science testimony meeting, but fear would always pop up and keep me from speaking. I would even come to the meetings prepared with something written so I wouldn’t forget anything, and I practiced saying it ahead of time, but I still sat quietly, saying nothing at all. I was afraid that I wasn’t eloquent enough to express myself clearly, especially after hearing how well-spoken other testifiers were, and that I might be found wanting by comparison.

I finally called a Christian Science practitioner to pray for me regarding this problem. During our conversation, I also asked the practitioner to give my young son treatment through prayer because he had a stuttering problem. Each time he tried to utter a word, he would stomp his foot until the word came out of his mouth. The practitioner agreed to pray and assured me that both my fear of speaking and my son’s frustration with speech were errors that could be corrected spiritually. 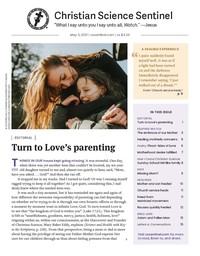