When my elder son was born, he seemed to be healthy and cheerful, but after six months he became sick with symptoms of chest blockage. I thought it was a seasonal cough or cold and consulted doctors for his treatment, which provided some relief. But after a few days, the symptoms would reoccur. Eventually, to my surprise, the doctors diagnosed it as asthma. He would have to use an inhaler for the rest of his life. Because two of my in-laws have the same problem, the doctors declared the condition hereditary. 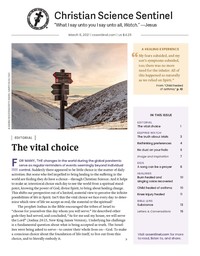