I once visited the restored 17th-century community in Williamsburg, Virginia, and learned something surprising: If a citizen didn’t attend church each week, he or she could be fined or jailed. Not, as you might think, for moral or religious offenses, but because in the days before newspapers, the church was where everybody got the latest news. The punishment was harsh because to be uninformed was to open the door to not just personal hardships but also to the possibility of putting in danger the whole community.

Four centuries ago, at least in Williamsburg, publishing news was a once-a-week, one-source, in-person event. Today, the gathering, dissemination, and consumption of news is a never-pausing cycle that many feel they cannot get away from, and at the same time, cannot live without. “Breaking news” used to refer to the most current and imperative thing to know. But what is considered news today ranges from information, analysis, and informed commentary to partisan opinion, gossip, speculation, and even intentional falsity. Smartphone users are bombarded with a constant stream of “breaking news,” all of it current but little of it rising to the standard of news that is imperative to know in the moment. As a result, the news business is often seen as more of a contributor to confusion and division than a reliable source of enlightenment for the common good. So, with all there is to hear, see, and read, how can we possibly discern what is really legitimate, truly needing our attention, and requiring thoughtful—even prayerful—response?

Send a comment to the editors
NEXT IN THIS ISSUE
Bible Lens
Bible Lens—September 21–27, 2020 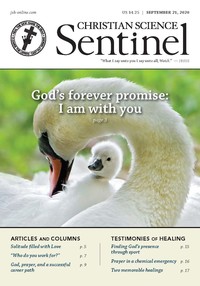