In her textbook on Christian Science, Science and Health with Key to the Scriptures, Mary Baker Eddy writes, “I was called to visit Mr. Clark in Lynn, who had been confined to his bed six months with hip-disease, caused by a fall upon a wooden spike when quite a boy”

(pp. 192–193). She goes on to describe the condition of the wound as shown to her by the doctor present, who said that the man was dying. After the doctor left, Mrs. Eddy went to the man’s bedside. “In a few moments,” her account continues, “his face changed; its death-pallor gave place to a natural hue. The eyelids closed gently and the breathing became natural; he was asleep. In about ten minutes he opened his eyes and said: ‘I feel like a new man. My suffering is all gone.’ ” 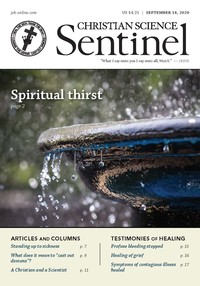