Unity in the workplace

For those who may be experiencing something less than unity in the workplace—particularly issues of conflict between men and women—it’s useful to ponder this recommendation in Science and Health with Key to the Scriptures by Mary Baker Eddy: “Let the ‘male and female’ of God’s creating appear” (p. 249). We might ask ourselves, “What might this appearing look like in my workplace?” When I did that, contemplating, praying, and listening for a higher view, the answers began to change my experience, sometimes dramatically.

I began by exploring where the idea of “the ‘male and female’ of God’s creating” comes from. The Bible opens with God’s creation of heaven and earth, and tells us that this universe of light is separated from darkness. Then man is introduced as made in God’s image and likeness. And man is described as “male and female”—wholly spiritual, not physical. I began to think about the significance of the words male and female.

Send a comment to the editors
NEXT IN THIS ISSUE
Article
Relationship status: Loved by God 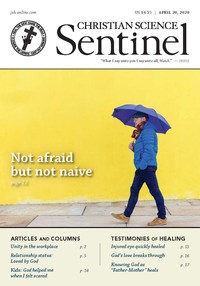