The Bible tells a story of the Syrian army surrounding the city of Dothan in order to capture the prophet Elisha. In desperation, his servant asked, in effect, “Now what?” Their demise seemed imminent.

Elisha’s response was surprising: “ ‘Don’t be afraid,’ the prophet answered. ‘Those who are with us are more than those who are with them.’ And Elisha prayed, ‘Open his eyes, Lord, so that he may see.’ Then the Lord opened the servant’s eyes, and he looked and saw the hills full of horses and chariots of fire all around Elisha” (II Kings 6:16, 17, New International Version). Not only were they saved, but Elisha went on to spare his captured enemies as well. 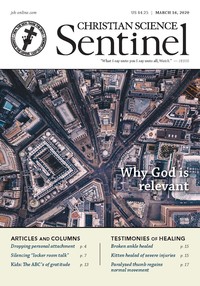