When I was young, I attended a boarding school organized by Christian Scientists, which I found helpful in many ways. But while most of the pupils completed their high school education and left with happy memories, I left under distressing circumstances. I was in a physical relationship that had gotten out of control, and I sought help from people I thought would be able to help. Instead, I felt they simply expressed shock and disappointment. That was not what I was after. The school called my parents to pick me up, and two days later I was expelled. A few months later, I was given the opportunity to return. But by then I was enrolled in another school and didn’t go back. So started a very difficult time in my life, including being mercilessly bullied in the new school and a failed suicide attempt.

That pretty much removed my love of, and commitment to, Christian Science. I stopped attending Sunday School and pushed away people I’d known my whole life. I told my parents that Christian Science wouldn’t be part of my life anymore. They were disappointed, but supportive. 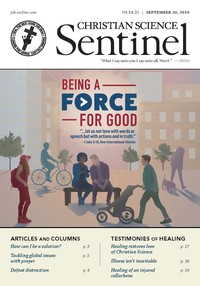