The concept of daily needs being met through spiritual ideas is profound. But how can it be proved practical? For starters, a number of accounts in the Bible show what’s possible.

For example, the book of First Kings tells of the prophet Elijah having his need for food and drink met during a period of extended drought (see 17:2–16). It says: “The word of the Lord came unto him, saying, Get thee hence, and turn thee eastward, and hide thyself by the brook Cherith …. So he went and did according unto the word of the Lord.” Ravens brought food to him, and he drank from a brook. And when the brook dried up because of the ongoing drought, God directed Elijah to go to Zarephath, where God had commanded a widow to feed him. Elijah listened for and followed these God-inspired thoughts, and not only was he taken care of, but so was the widow.

Send a comment to the editors
NEXT IN THIS ISSUE
TeenConnect: Trending
Where are you looking for your worth? 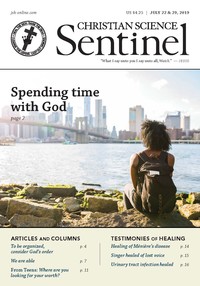