TeenConnect: Your Healings May 6, 2019 ISSUE

A healing of celiac disease

Originally appeared online in the teen series: Your Healings - March 12, 2019

When I was only eleven years old, I was told that I had an incurable disease called celiac disease. Celiac disease meant I couldn’t eat bread, pasta, cakes, some soups, and worst of all, candy. It was challenging to go to restaurants with my family or over to a friend’s house. I felt like a burden.

When I got the diagnosis, I wasn’t a Christian Scientist. The following year, my mother married her best friend, who is a Christian Scientist, and I began to learn more about Christian Science healing. However, it never occurred to me that I could be healed of something doctors called incurable. Finally, though, I was so tired of feeling like I was a burden to everyone because of all the things I couldn’t eat that I decided to turn to the Christian Science textbook, Science and Health with Key to the Scriptures by Mary Baker Eddy, for answers.

It never occurred to me that I could be healed of something doctors called incurable.

From reading Science and Health, I learned that I am spiritual and perfect, totally cared for by God. God is good and all-powerful, and there is nothing bad that can challenge God’s power or harm me. These ideas helped me feel less afraid.

I was determined to see my spiritual perfection clearly and not allow the fear of some disease to stop me from being happy. When the Super Bowl rolled around that year, I had my first taste of Domino’s pizza in two years, and the football team I was rooting for won—two wins in one night. As I enjoyed the evening, I was thinking about the idea that I am God’s spiritual, perfect child, so there is nothing in the world that can harm me, not even pizza.

After that, I lived like a normal teen, not allowing fear or any restrictions to control what I ate. However, at one point, the symptoms started to return. I was scared and disappointed. I thought I had worked through this issue, and I hadn’t expected to see it resurface.

Around that time, I had an opportunity to go on a trip with other young Christian Scientists. The only condition of my going was that my mom wanted me to talk to a Christian Science practitioner about the issue I was still having with food. I knew my mom just wanted me to be healed. But I was so nervous to call a practitioner, because who wants to talk to a complete stranger over the phone and tell them your problems?

I’ve let go of everything I was told about being vulnerable to disease, and I continue to grow in my spiritual understanding of my real being in God.

However, I really wanted to go on the trip, so I called a practitioner, and it was actually very helpful. She began praying for me, and I prayed, too. We focused on knowing what is good and true about me as a child of God. I also began thinking differently about my body. I realized that instead of being made up of a bunch of parts that can become diseased, I am really the expression of God—Spirit, Soul. By getting a clearer idea of what my substance and identity are and understanding that they are spiritual, I was able to see that disease couldn’t touch me or have anything to do with me. Once I had this realization, all of the fear and concerning symptoms began to fade.

I went on the trip with no problem, and since then I’ve been able to live my life freely, without worrying about what might happen or how certain foods might affect me. I’ve let go of everything I was told about myself as being vulnerable to an incurable disease, and I continue to grow in my spiritual understanding of my real being in God. Every sign or symptom of celiac has completely disappeared. This healing took place over a year ago.

I am very grateful for God’s care and the freedom I’ve gained through my understanding of Christian Science. 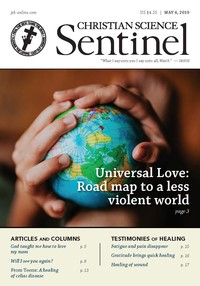