Instantaneous healing of back injury

Almost twenty years ago, at a time when I’d been away from branch church membership for several years, I prepared to leave for work one Friday morning. I found that the electricity was off, so I released the garage door from its electric opener, bent down, and lifted the door manually. After doing so, I suddenly found I could not stand upright and was in excruciating pain. With great difficulty I continued on to my office. I came home early that afternoon to collapse into bed.

On Saturday morning, in desperate need of relief, I picked up the current Sentinel. It fell open immediately to a healing of what, from the testifier’s description, appeared to be an identical situation, from which she’d had an immediate and complete healing! 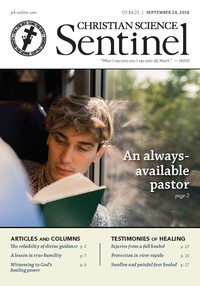