When I was an undergrad, my bedroom looked out onto a cathedral tower topped off by a fifteen-foot statue of an angel. Around midnight the lights illuminating the main body of the cathedral shut down while the winged angel remained floodlit—a heavenly symbol hovering over an increasingly secular campus.

I was part of that growing secularization. Like many students I had turned my back on religion and was investing my hope for a better world in political activism. I went on protest marches and boycotted a professor whose political views I deemed unacceptable. Yet far from satisfying my desire to improve the world, my attitude and actions were fueling an increasing sense of anger in me.

Send a comment to the editors
NEXT IN THIS ISSUE
Bible Lens
Bible Lens—September 18–24, 2017 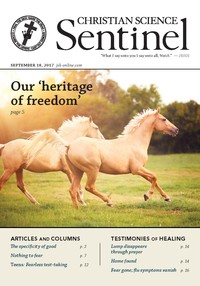