I recently watched a BBC film about the lives of the Brontë sisters—Charlotte, Emily, and Anne—who were intelligent and creative, and wrote as an outlet for these talents and to earn an income. Most notably, Charlotte wrote Jane Eyre and Emily wrote Wuthering Heights. Yet because of the social climate in Great Britain in the 1800s, they felt compelled to publish their novels under male pseudonyms.

These women were contemporaries of Mary Baker Eddy. Although they lived an ocean away, their social, political, and legal circumstances were similar. Mrs. Eddy faced the same culture of limited opportunities for women, who were not allowed to own property, vote, or have legal control over their own children. Women were perceived to have a very limited intellectual capacity, and there was a fear that if a woman’s intellect was tested, she would suffer a mental breakdown. For centuries women were not thought to be reliable witnesses in a court of law. 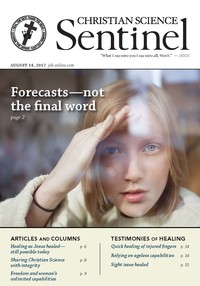