The healing power of Mother Love

A story with a picture I recently saw in a newspaper tugged at my heartstrings. It was about a photojournalist in a Syrian refugee camp being shadowed by a 14-year-old boy, who was intrigued by his work. This boy looked as if he was wearing soaking wet, worn-out tennis shoes and a very inadequate looking jacket, but he had a look of expectancy on his face. He looked to me like he needed a mother. That made me think more deeply about mothering, what it means spiritually.

As I was growing up and attending a Christian church, I learned about God as Father. When becoming acquainted with Christian Science, I was amazed to learn about God as Mother, as well. Mary Baker Eddy, the Discoverer of Christian Science, makes it clear in Science and Health with Key to the Scriptures that God is both Father and Mother. After the first line of the Lord’s Prayer given in the Bible—“Our Father which art in heaven”—is the spiritual interpretation of that line: “Our Father-Mother God, all-harmonious” (Science and Health, p. 16). It was a slam-dunk moment for me. Of course! Since God is the creator of all, God’s nature must include the full spectrum of qualities—feminine as well as masculine. 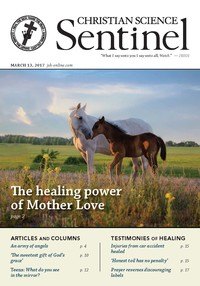