Originally written in Portuguese, this first appeared in the March 2017 Portuguese, Spanish, French, and German editions of The Herald of Christian Science.

A few years ago, my father died and I became really sad. Around this time, I became pregnant and also started to develop low self-esteem. The situation worsened after my son’s birth. And when my son was nine months old, my husband and I filed for divorce. So I began to feel increasingly sad. I did not want to be away from my home and socialize with friends or other people, or even to have contact with family members. I just wanted to stay in bed, sleeping all the time.

At one point, I visited a psychiatrist, who said I should take five pills daily. I started to feel dependent on that medication, which was very distressing to me. The psychiatrist also recommended that a therapist support the case, and so I began to visit a therapist’s office on a weekly basis.

Send a comment to the editors
NEXT IN THIS ISSUE
Image and Inspiration
'Tis borne on the zephyr at eventide’s hour ...' 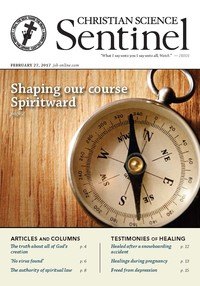