For over a year I had a growth on my lower leg. I did not pay much attention to it at first, figuring that it would go away, but as it grew larger I became more concerned.

As I considered what needed to be addressed, I realized that I’d had an increasing concern about a person at my workplace who I felt was rude and belittling. This person started making daily comments that hurt my feelings and made me question my self-worth. I had allowed unpleasant thoughts to grow in my thought about both of us. It was obvious that my view of myself needed to be transformed, and I needed to affirm that my identity was as God’s child and could not be affected by this person’s obnoxious comments. I also needed to see that this individual was actually created by God, too. 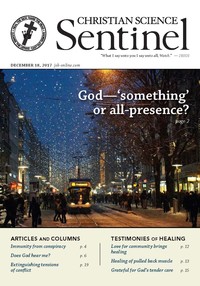