Led by God’s direction at the office

When my boss, her boss, and the person to whom we all reported left the university I worked for, I suddenly found myself in charge of a large office that submitted thousands of research proposals each year on behalf of the organization. As if that were not enough, a large funding opportunity became available that created the need for our office to handle an additional 2,000 proposals in a short period of time. Severe budget cuts meant employees had to work fewer hours and also prevented us from hiring more staff. When I learned of the situation, I went home and cried. I had no idea how to handle this.

My husband put his arms around me and told me I had a choice to make. I could simply resign, or I could turn to God for guidance. This second suggestion was a comforting one, and I stopped crying, hugged my husband, and called a Christian Science practitioner. A practitioner is someone who prays for those who ask, and that seemed like something I needed! 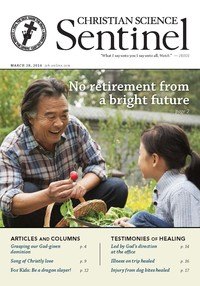