Originally written in German, this first appeared in the January 2016 Portuguese, Spanish, French, and German editions of The Herald of Christian Science.

I had sometimes heard people talk about panic attacks, and I had always wondered how it’s possible that people could give fear so much rein that it could limit their freedom of activity. And I could never have imagined that one day fear and panic would get a grip on me! Looking back, I now realize that by giving power to those reports about panic attacks, I had inadvertently given life to the problem, instead of denying it power and reality as Christian Science teaches us to do. I thought too much about other people suffering with this condition and about the images associated with it; in other words, I believed it. And then one day, several years ago, I myself experienced the same symptoms.

Initially, I just felt plain frustrated and sorry for myself. All my thoughts kept circling around the fear. I literally feared the fear. I felt helpless, completely at the mercy of this fear. Even though I tried to pray, I felt that my attempts were halfhearted; I felt as though I was fighting a losing battle. 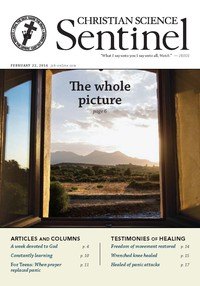