Humility has had something of a bad rap over recent decades. It has often been seen as weakness in contrast to power, vulnerability in the face of aggression, and self-effacement in place of self-promotion. But is that truly what humility is?

Perhaps an answer lies in the story celebrated this time each year, particularly the role played by a remarkable young woman. Millions of Christmas cards annually portray Mary meekly cradling the infant Jesus, whose birth was the promised arrival of a long-anticipated Messiah. But they can’t begin to depict the powerful spiritual backstory of this meek mother.

Send a comment to the editors
NEXT IN THIS ISSUE
Bible Lens
Bible Lens—December 19–25, 2016 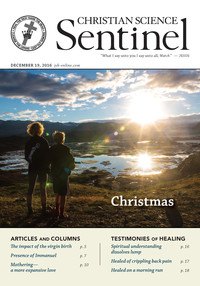