Healed of symptoms of hepatitis

Originally written in Spanish, this first appeared in the October 2016 French, Portuguese, Spanish, and German editions of The Herald of Christian Science.

I was married in the United States, and my husband and I lived there for three years until we moved to Mexico, where I had requested a work visa. I had to go to the border and cross over to the American side to pick it up.

Just before I left, my mother-in-law and two other people told me I had symptoms that looked like hepatitis. I noticed they were all concerned, and one of them told me I should see a doctor. However, I decided not to, because, for me, the remedy lay in prayer. 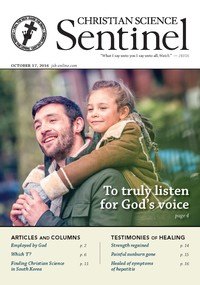