When our two children were under the age of three, our family moved to a large city to pursue a job offer that was promised to my husband. After two months, it was evident that this job was not what had been promised. Our financial needs became dire, as our bills accumulated. I was very fearful and worried.

One morning, I noticed that our two children were covered in dime-sized spots. They were not in pain and there was no irritation. By that afternoon, I, too, had these spots. I didn’t know any Christian Scientists in the area, so I opened a Christian Science Journal and found a practitioner in our city. I called her and told her of the physical conditions. 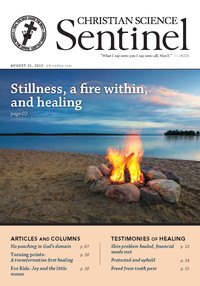