I grew up attending Sunday School, and Christian Science was part of my life. However, after college I began studying the Christian Science Bible Lesson more faithfully and regularly attending church. I first became interested in having Christian Science Primary class instruction when I became friends with a woman younger than myself who had already taken class.

I was so surprised because I thought class was something you did much later in life. She and I had long spiritually oriented conversations after church services, and she inspired me. Being the youngest person I’d met who had taken class, she definitely planted the seed that I didn’t have to wait. I spoke with a few teachers right after that, but didn’t feel quite ready. My husband and I had a baby, life got busier, and a few years passed. Then I was praying with a Christian Science practitioner when the idea of class came up again, and I found out she was a teacher. Now it was clear to me that it was time. 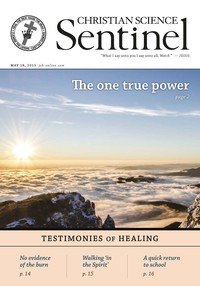