The idea of loving one’s enemies can sound, to the uninitiated, naive and impractical. But in fact, it’s a powerful commandment that fosters real and lasting peace. The Monitor editorial “Love from China’s famed dissident” lifted my thought and led to the resolution of a tough personal challenge.

When imprisoned Chinese political dissident Liu Xiaobo wrote a friend, his message said in part, “Hatred can rot away at a person’s intelligence and conscience. Enemy mentality will poison the spirit of a nation, incite cruel mortal struggles, destroy a society’s tolerance and humanity, and hinder a nation’s progress towards freedom and democracy.” 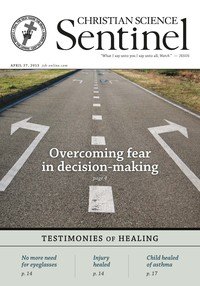