A friend recently sent along an Internet video that he felt was especially moving. I felt the same way as I watched it, and gradually I realized why.

The video opened with a winter scene in the Netherlands, near dark. The sky was spitting some raindrops and an occasional snowflake. People were Christmas shopping in the city center—somewhat preoccupied, expressionless. Then the camera began focusing on a man who was preparing to sing at the far edge of the square. He had placed his upturned hat on the pavement in front of him like a typical street entertainer, though he was actually an accomplished performer. As he began to sing, a few people stopped what they were doing to hear what was an uncommonly beautiful voice. More and more were drawn to listen. 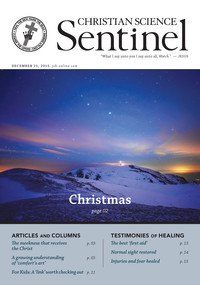