During my last semester of college, I was feeling on top of my game spiritually, academically, and socially. I already knew what I would be doing after graduation, and I wanted to spend my last month of school on “vacation,” which I thought was well deserved! But then I started experiencing a collection of symptoms including colds, fevers, headaches, and exhaustion. I let go of my “vacation” plans, and prayed with the support of a Christian Science practitioner.

I was a captain of the lacrosse team, and our final lacrosse tournament took place during this time. I wanted to be able to play. After praying with the practitioner for a few days, I felt well enough to be able to play in the final two games, which were the best I have ever played. The next day, though, it was clear that everything was not completely well. I continued to struggle with illness, and found I was also having difficulty walking up stairs. 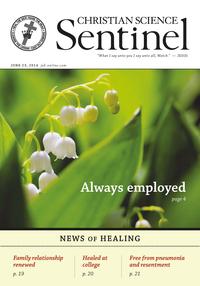