Originally written in French, this testimony appeared in the June 2013 French, Spanish, Portuguese, and German editions of The Herald of Christian Science.

In April 2011, my husband and his brother went to Greece for an eight-day vacation. The first day of his journey, my husband called me to tell me that he wasn’t feeling well at all, and was suffering from stomach flu. Many other people at the hotel were manifesting the same symptoms. His brother was starting to get ill as well. Since my husband and his brother do not practice Christian Science, they took some medicine, and after five days they felt more or less well.

When he came back home, my husband told me briefly about that experience. That very day, I started experiencing the same symptoms of the illness he had described. I was surprised by the speed at which contagion seemed to spread, first in Greece and then in France. I immediately thought of what Mary Baker Eddy writes in her book Miscellaneous Writings 1883–1896: “Floating with the popular current of mortal thought ... we do what others do, believe what others believe, and say what others say. Common consent is contagious, and it makes disease catching” (p. 228). 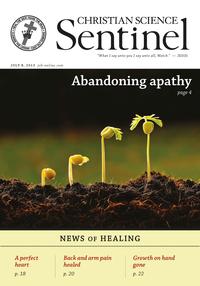