This article was originally written in German and published in the German, French, Portuguese and Spanish editions of The Herald of Christian Science.

Text passages containing the term “from highest authority” usually relate to ordinances that regulate human affairs. This designation increases the importance of a matter or a process and often expedites its implementation. For example, a verdict reached by one court can only be repealed by a higher court. And to get a commendation from “the highest authority” is a reasonable desire many may have with their projects.

Our son experienced the effects the influence that a “highest authority” can have when he was in high school. Tom was confronted with an assignment to find himself a place for an internship. He was given a certain time frame in which to accomplish this. However, shortly before the deadline, he still had not had any success. In my role as a father, I had made a few suggestions for him to apply at this or that workplace, but his response had been unenthusiastic. 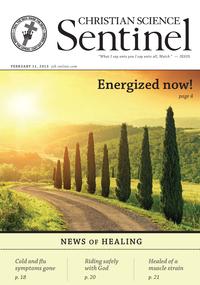