Several years ago, I developed a large and painful infection in my gum. Praying diligently as I’d been taught did not seem to help, so I called a Christian Science practitioner. In Science and Health with Key to the Scriptures, Mary Baker Eddy tells us, “In patient obedience to a patient God, let us labor to dissolve with the universal solvent of Love the adamant of error,—self-will, self-justification, and self-love,—which wars against spirituality and is the law of sin and death” (p. 242). Along these lines, the practitioner and I prayed together to correct some undesirable character traits—which I felt included self-righteousness—by remembering that I reflect only God, good. The infection dissolved with the “solvent of Love.”

At about the same time, a painless growth that had been on my body for many years became infected, and though I again prayed diligently, the spiritual answer that had brought healing to the first condition did not seem to resolve this one. There was more to be learned. Mrs. Eddy says that the Christ is “the true idea voicing good … dispelling the illusions of the senses; …” (Science and Health, p. 332), and so I daily prayed to hear and do the good that the Christ is voicing to us, and to have all the illusions of the senses dispelled. 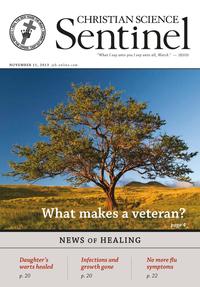