My driver’s license expired in September 2011, and when I went to have it renewed, I had to take a vision test. I was not able to see the letters on the chart, so I was given a form that needed to be filled out by an eye doctor.

I made an appointment, assuming my eyeglasses would need correction. Not so. The optometrist informed me that I had cataracts and that I must have a medical procedure done by another doctor (an ophthalmologist). I was told that this was a very simple procedure and that afterward I would be able to see perfectly without eyeglasses at all. The news was very distressing, as I didn’t want to take this step, but thought it was my only choice. I called a Christian Science practitioner and told her the whole story. She told me that I did have a choice. And that the situation could be corrected through prayer. 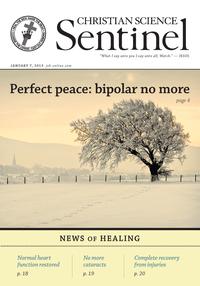