A library, a book, and a new path

Through God’s loving guidance, I found Christian Science in April of 2007. At that time, I had been a single mother for nearly four years. I had recently moved into a small house with my two sons. They were 13 and nine at the time. Life leading up to this time had been pretty rocky. I was trying to do it all on my own and boy was I feeling it! I didn’t have any family living in Massachusetts. I was running my own business and was trying my best to walk the delicate balance between work and family. Each month the gap between the money I earned and my expenses got bigger and bigger.

It was mid-April, a time of year in New England that can look like winter, like spring, or some damp and chilly blend of the two. It had been a long and rainy day and I was struck with a very strong desire to have the day consist of more than video games for my boys. I had heard of the Mapparium as a local tourist attraction here in the Boston area (see marybakereddylibrary.org). I told the boys that we were going to get out of the house, and we drove up to Boston to the world headquarters of the Christian Science Church. 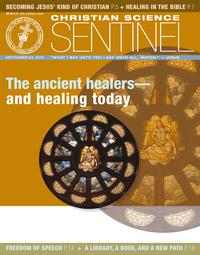