Prayer during an airport crisis

Watching a man perched dangerously atop a terminal, a traveler turns to God for help.

In March of this year, I was traveling through the airport in Shanghai, China. My traveling companion and I had checked our bags and received our boarding passes when we found a crowd milling about, blocking our way to the gate. A look up revealed that a man had climbed up to the top of the terminal about three or four stories above the main floor. His intentions were unknown, but when I saw so many people in the crowd casually taking pictures and videos with their phones, it revolted me, and my initial reaction was to get as far away as possible.

It looked as though the emigration desk at the other end of the terminal was open, and I indicated to my friend that I wanted to leave. But my traveling companion pointed out that if the man was making a political statement or claimed to be a security risk, we would be stuck on the plane-side of the terminal if the authorities decided to close the airport. If we made it to the gate, we could find ourselves delayed for quite some time. I had to admit my friend was probably right.

Send a comment to the editors
NEXT IN THIS ISSUE
Article
The 'balm,' not the bomb 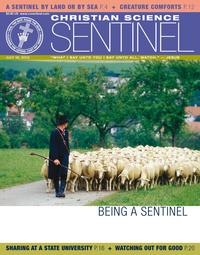